In this month’s Finder RBA Cash Rate Survey™, 32 experts and economists weighed in on future cash rate moves and other key issues on the state of the economy.

Sarah Megginson, senior editor of money at Finder, said the rate rise is likely to lead to further hikes in home loans.

“This rate rise, along with a property market that is beginning to cool, means some recent buyers may be caught out now – or when their fixed rate ends.

“If your rate has jumped or looks like it is going to, it might be time to go home loan shopping and find a better interest rate,” Megginson said.

How much your monthly mortgage repayments could increase by

The Federal Government recently announced the price caps on the first home buyer guarantee scheme would increase, along with the number of guarantees available.

The scheme allows first home buyers to purchase a home with as little as a 5% deposit, and the price cap on eligible homes has been raised to $900,000 in Sydney and $800,000 in Melbourne.

However the majority of panellists who weighed in* (70%, 16/23) believe the increased caps will put upward pressure on property prices.

Sarah Megginson said buyers should be cautious of these schemes.

“A 5% deposit means you are paying interest on 95%. Plus, any dips in the property market means that it is possible to fall into negative equity – as did many property buyers in Europe during the GFC.”

However Craig Emerson of Emerson Economics noted that the scheme was good for single mothers in particular, when secured by the National Housing Finance and Investment Corporation.

Labor Party leader Anthony Albanese has pledged a commonwealth equity contribution of up to 40% of the purchase price of a new home, and up to 30% for an existing home for eligible Australians on low and middle incomes.

Increasing the housing supply is key for bringing down rental prices

In April, nearly half of Australians renters (45%) said they struggle to meet rental payments, according to Finder’s Consumer Sentiment Tracker. 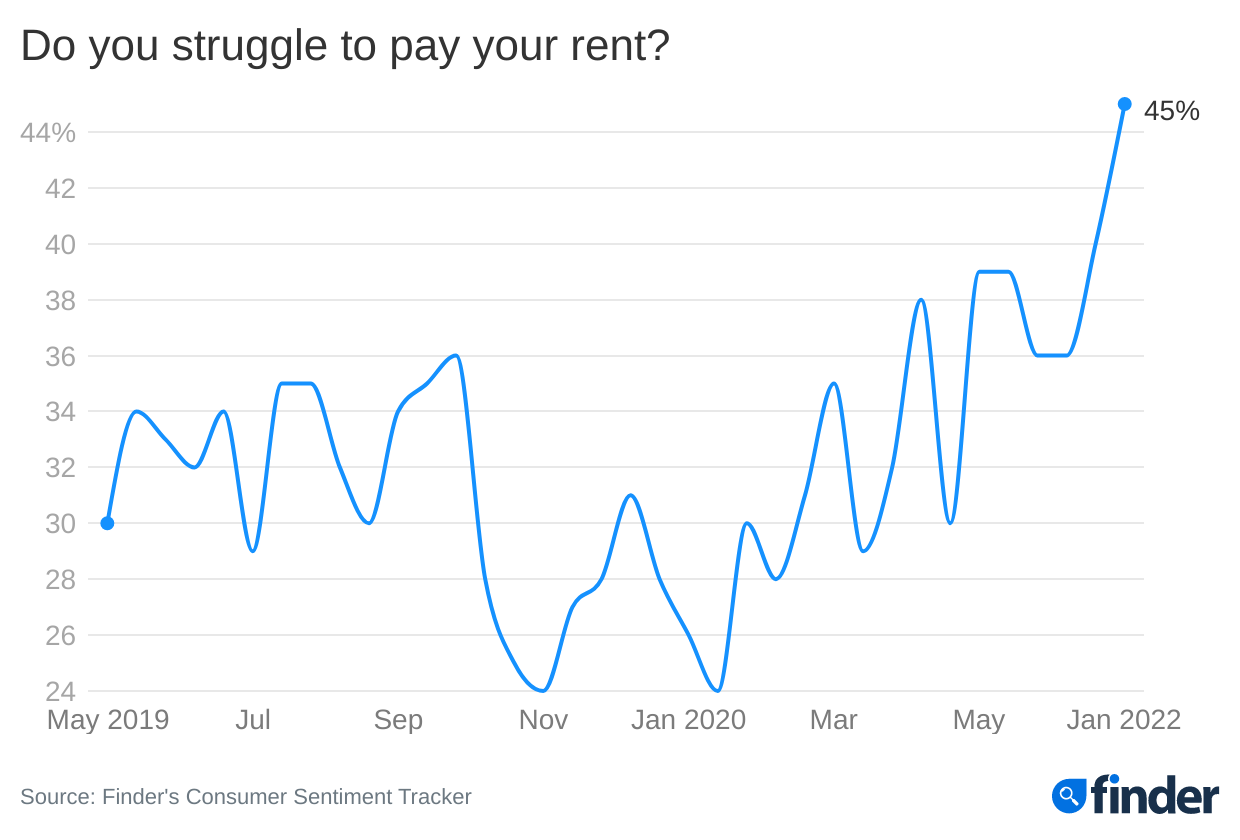 While just over half of the panellists (52%, 12/23) believe the government should be doing more to help the growing number of struggling households, experts are largely in agreement that increasing housing supply is the key mechanism that will help lower rents.

“Asking people to get into a mortgage with only 5% equity in a falling property market is a risky way of doing that.

“With rents rising at record rates, it's no wonder renters are feeling left out,” Megginson said.

Tim Reardon from the Housing Industry Association said a lack of housing supply needs to be fixed, by all levels of government.

*Experts are not required to answer every question in the survey

Here’s what our experts had to say:

Andrew Wilson, My Housing Market: "Although the RBA has recently moderated its stance on the timing of a rate increase, it remains unclear whether it will now abandon its stated position of awaiting a consistent period of strong wages growth before acting. The official data confirming this possible outcome will not become available till late August.”

Malcolm Wood, Ord Minnett: "Inflation is now sustainably back in the RBA's band, the economy is strong and the labour market is tight."

David Robertson, Bendigo Bank: "The CPI data including a core inflation rate of 3.7% adds even more urgency for the RBA to lift interest rates. A May hike of 15 basis points followed by 25 bp in June taking the cash rate to 0.5 % is now more likely given this data and with unemployment trending below 4%."

Craig Emerson, Emerson Economics: "The RBA might well judge that the trimmed mean inflation rate does not warrant a cash rate at the emergency low level of 0.1 per cent."

Jonathan Chancellor, The Daily Telegraph: "The RBA has the confirmation it awaited of inflation necessitating the rise"

Shane Oliver, AMP: "Inflation has blown out to above 5%, full employment has been reached and it's now only a matter of time before official wages data picks up. Delaying further will risk a rise in inflation expectations making it harder to get inflation back down."

Brodie Haupt, WLTH: "With continued uncertainty and rising pressure from inflation, I think it is likely there will be a change to the cash rate this year at some point. Monetary policy typically lags in taking effect on the economy."

David Zammit, Mortgage Choice: "The economy is strong, with the unemployment rate sitting at a record low and while inflation is rising, it is unlikely the RBA will lift the cash rate right before the Federal Election, so I don’t expect to see a change in May. However, a compelling case is building for a move in June pending the results of the March quarter CPI and wage price index, which will be released later this month."

Cameron Kusher, REA Group: "The RBA appears to have been overrun by market expectations. They had been willing to be patient but as everyone moved their expectations to June there was little if any pushback from the RBA or any of the journalists perceived to have a line into the RBA."

Benjamin Udy, Capital Economics: "Inflation is surging and the RBA is coming around to our view that it needs to act. We expect the Bank to wait until after the federal election is wrapped up before starting its hiking cycle in June. thereafter we think the Bank will hike rates at every meeting this year lifting the cash rate to 1.75% by the end of the year."

Mathew Tiller, LJ Hooker Group: "Inflationary pressures have continued to accelerate across the globe and Australia has not been immune, this means a rate rise is just around the corner. If the RBA doesn’t lift the cash rate in May (due in part to the upcoming Federal Election) it will more than likely do so in June."

Tim Reardon, Housing Industry Association: "This will give the RBA two more CPI readings and one more wage price index reading, and enough confidence that inflation is sustainably within its 2-3 per cent target band."

Leanne Pilkington, Laing+Simmons: "It’s a close call, as inflationary pressures demand attention despite the Reserve Bank being open in its preference not to lift rates ahead of the election. Assuming a rate rise is imminent, it’s not only a question of when but by how much?"

Annette Beacher, ausbiz: "SHOULD hike by 15bp in May, but failing that SHOULD hike 40bp in June. What will they do? Who knows!"

Mark Crosby, Monash University: "It will be very clear that inflation is now baked in, and so time to move rates towards some level of normality. The aim for the cash rate should be to 1.5% by year end at a minimum."

Jason Azzopardi, Resimac: "I previously believed a November date however the case for an increase earlier is becoming increasingly compelling which coincided with the tone of RBA messaging changing recently."

Nicholas Gruen, Lateral Economics: "I have always thought the RBA would move faster than they have foreshadowed they will as calls come to restrain inflation. "

Dale Gillham, Wealth Within: "All the banks are factoring in rate rises and so I would think after the Federal election we will see an upward movement in rates. We are in a very low rate environment and a long way from what is normal and so continual rate rises over the next few years should be of no surprise. "

Saul Eslake, Corinna Economic Advisory Pty Ltd: "There's likely to be a case for raising rates at the May meeting (assuming the March quarter CPI out on Wednesday, after the deadline for completing this survey) shows 'headline' inflation above 4% and 'underlying' inflation above 3%. But the RBA seems (taking its words at face value) inclined to wait until after it has seen the March quarter WPI data, which doesn't come out until 18th May. So that points to June. I'm not sure the March quarter WPI will show a significant acceleration in wage inflation, but if the RBA isn't going to do the first increase in May, they may well end up doing 40bp in June. "

Tim Nelson, Griffith University: "Inflationary pressures are building and the RBA will seek to get ahead of these. "

Michael Yardney, Metropole Property Strategists: "The RBA seems to have changed its stance and rather than patiently waiting for wages to rise, will look to tackle rising inflation sooner rather than later."

Rich Harvey, Propertybuyer: "The RBA has changed their perspective and dialogue in the previous months board minutes.  With inflationary pressures building strong momentum, the RBA is awaiting confirmation that wages growth is actually filtering through the economy. They are likely to move 0.15% on first increase then a series of 0.25% increases over the next 12 months in line with ongoing economic data.  The era of super cheap money is over for now."

Jakob B. Madsen, University of Western Australia: "Inflation will start to become more fundamental because of inertia and low unemployment."

Christine Williams, Smarter Property Investing Pty Ltd: "The timing will depend on which party wins the Federal Election. My thoughts if Liberals will the RBA will wait until last quarter, watching the employment rate and inflation rate, if Labour wins, I feel the RBA will increase within 3 months of election."

Noel Whittaker, QUT: "We all know rate increases are coming but I don't think they will do it just before the election."